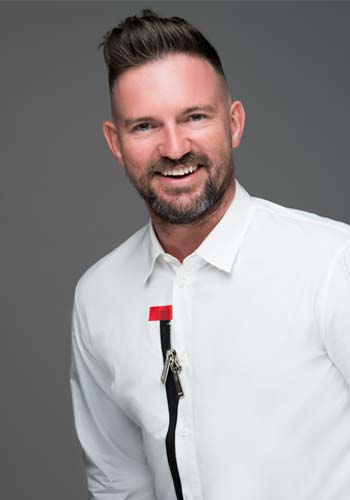 Scott began his training at the Dance School of Scotland and went on to gain a musical theatre diploma at the prestigious Laine Theatre Arts College, London. Once graduated, Scott started his career in Musical Theatre appearing in musicals Saturday Night Fever and Oh What a Night and then decided to fulfil his dreams as a commercial dancer and toured the world on stage and screen dancing with superstars Cher, Pink, Kylie Minogue, Dannii Minogue, Girls Aloud, Sugababes, Anastacia, Jamelia, Sam Sparro, Basement Jaxx to name just a few. He danced for iconic legends Michael Bublé, Dame Shirley Basey and Cliff Richard on tours and TV programs – American Music Awards, The Brit Awards, TOTP and The Royal Variety Performance and even graced the big screen dancing in Kevin Spacey’s hit movie Beyond the Sea. Scott started his choreography career working for P & O cruise lines, putting on theatre shows for a variety of their fleets and choreographed the biggest Christmas production in the UK, Thursford Christmas Spectacular for 2 consecutive years working with 20 dancers, 50 singers and a 40 piece live orchestra.

Over the years, Scott has choreographed a number of large-scale events in the Gulf region, since setting up his company ‘Diverse Performing Arts Centre’ in 2008 with his wife, Lisa. Scott was the head choreographer for one of the biggest events in Dubai’s calendar, Dubai World Cup Opening and Closing Ceremony 2014 with over 500 performers booked and directed by Scott and the Diverse team, he also choreographed the Opening Ceremony of Dubai World Cup again in 2016. He was the choreographer and director for 200 of our Diverse performers for the Chinese New Year Opening and Closing ceremony at Meydan racecourse, he choreographed breath taking opening shows for the launch and grand opening of Yas Mall, Abu Dhabi and Beirut City Centre. Scott, was the head choreographer for MENA Special Olympic Games 2018, filmed worldwide and performed to thousands in Abu Dhabi.

Scott’s bespoke choreography has been showcased at many gala dinners around the region and worldwide. The prestigious Rolex gala dinner with 30 of his dancers performing legendary dance styles from many different decades of dance, from the 1900’s through to present day. He choreographed the Oil Barons ball for 3 consecutive years with his dancers performing alongside Diva, Heather Small from M People. Scott’s shows were showcased at the launch of the QE2 new year’s eve launch, performing with the legendary Gypsy Kings, with many other spectacular NYE productions of Moulin Rouge and Great Gatsby at the iconic Burj Al Arab. The Burj Al Arab being a popular venue for Scott he has also choreographed the launch of their new pool and beach area with international synchronized swimmers performing alongside his dancers with a sensational international vocalist. He created shows for the ADIPEC gala dinner awards for 2 consecutive years, choreographing his dance team with musical quartet Bond. However, we must not forget the prestigious gala dinner for his Highness Sheikh Mohammed bin Rashid Al Maktoum’s Gala Dinner for the Dubai World Cup in 2015 and 2017, with his team performing in front of a glittering VVIP audience. More recently, Scott was the choreographer for the French business council gala dinner at Dubai Opera, celebrating the work of the late Michael Legrand, then jetting off to put together a glamorous around the world gala dinner for Ericsson in the stunning Conrad Hotel in the Maldives.

During the flash-mob craze days, Scott choreographed many of Dubai’s greatest flash-mobs. For many international brands and clients including – Du, Nokia, Grosvenor House, Harvey Nichols, Mashreq, MMI, Lenovo and more recently the huge flash-mob for the Expo 2020 two year countdown, over-looking the Burj Khalifa. The highest point in Scott’s flash-mob choreographing career, is of course the award-winning flash-mob, for Dubai Airport with over 15 million hits on YouTube.

He has choreographed a variety of live shows for F1 Grand Prix in Abu Dhabi for 7 consecutive years, as well as numerous corporate events for a variety of clients, car and product launches for Toyota, Hyundai, Audi, Philips, ESPN, Mubadala, Emirates NBD, and Panasonic, and not forgetting a number of edgy and vibrant fashion shows for Harvey Nichols, Bloomingdales, Saks 5th Avenue, Nike, BEBE, Red Tag and Level kids to name just a few.

Scott was the resident choreographer for the VIVA dinner show at Pacha Ibiza Dubai, which was voted Dubai’s No 1 Dinner Show of 2015, he then choreographed a new updated Arabic fusion dinner show Ziya also seen at Pacha. Scott’s Diverse choreographic style was also displayed at Ferrari World, Abu Dhabi in his projection mapping show Viva Ferrari and a spectacular dance show with international specialty acts and aerialists from around the globe for the production RED.

Coming from a long theatre background and appearing in musicals, as a performer himself earlier in his career, Scott has revisited his theatre roots, over the years choreographing productions of Disney’s HSM2 at the DUCTAC Theatre, Fame the Musical, Roger and Hammerstein’s Sound of Music, Lionel Bart’s Oliver, Tim Rice’s Joseph and the Amazing Technicolor Dreamcoat and Disney’s Camp Rock all at the Madinat theatre for Popular Productions. At the Madinat Theatre, he choreographed productions of Alice in Wonderland and the award winning Kalubela at the Madinat Theatre. He also provided choreography and dancers for a live immersive cinema experience of ‘Grease’ and ‘Mamma Mia’ with his team performing alongside a west end cast of singers and actors in 2018/19.

Additionally, Scott alongside his wife Lisa, have produced 9 successful productions at the Madinat Theatre with Step in Time and Dancing on the Sidewalk gaining the Timeout kids award gong for Best local theatrical production. With their 10 year Anniversary show A Decade of Diverse at Dubai Opera.

Scott more recently, was also the producer of the live art recreation of The Banquet of Anthony & Cleopatra with UK, cast and creatives of London’s West End at Louvre, Abu Dhabi in 2019.

Scott has 20 years of experience teaching around the globe and in the UK teaching at Laine Theatre Arts London, Urdang Academy London, London Studio Centre and Bodywork Company Cambridge. He is an extremely proud teacher at the diverse PA school and loves working with his students and seeing their growth, from year to year. He is so unbelievably proud of every single one on them and adores his Diverse family!